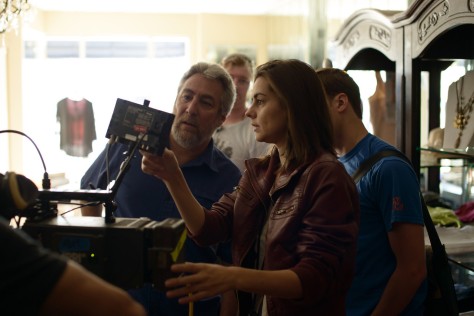 Andressa Cor has established herself among the top cinematographers working today. Achieved, revered and celebrated, the Brazil native has shot extraordinary film and television such as the award winning “No Tomorrow Without Merci,” Raja Pothineni’s “60 Eight,” Cameron A. Mitchell’s “Campground” and Dave Bean’s drama TV series, “Mrs. Fitzgerald is Missing,” to name a few.

Chief among Cor’s crowning achievements is her incredible cinematography in the short family drama, “Stealth.”

The plot follows Sammy on her first day of middle school in a new town where she sets out to fit in and make new friends. Sammy is pressed with the internal conflict of letting her new friends know that she was born a boy.

“Bennett told me people come talk to him after the screenings and a lot of them have tears in their eyes,” Cor said. “We got mentioned at the Emmys this year as well. The story touches people of all ages and genders. I can only guess that is because Bennett’s take on the story was focused on the universality of the feeling of being singled out when you are a kid. And he did it so well that everyone could relate to Sammy’s experience and feel for her.”

“Stealth” was produced by the American Film Institute (AFI), shot in Santa Clarita, Calif. and was the recipient of a production grant from the Alfred P. Sloan Foundation for Science.

Cor’s cinematography was work done in tandem with Lasseter, and it was an approach with a shot list designed for camera movements befitting to the story’s tone and rhythm.

“The pace is not fast at all, so there’s no handheld,” she said. “We hold the shots for as long as it’s necessary, and we didn’t shoot much coverage. There are scenes that are one shot only, like the scene after her [Sammy’s] breakdown. Because we were economic on our shot list, we had to be very precise. Being able to hold the camera in a shot for longer than expected helps the audience to relate to our main character before we cut. I think that is the biggest cinematography contribution to this film.”

For a film to achieve success, one of the integral components is the collaboration between director and cinematographer.

“Bennett and I have a great relationship and collaboration,” Cor said, “but mostly because he is really easy to collaborate with. Bennett is completely about what’s best for the story, and he does use all the talents around to counsel him before he arrives in a conclusion on what he will be doing, not only in cinematography, but every other department. I already knew that when we went to shoot “Stealth” because I had already shot a movie with him before, called “Blackout.”

Said Lasseter, “Ms. Cordeiro’s leading role as our cinematographer was absolutely crucial, as her shots were necessary in demonstrating Sammy’s overall surroundings and environment throughout the film. By framing Sammy’s constant surveillance from peers during her transition at her school, there is no doubt that Ms. Cordeiro’s choices in framing Sammy’s story visually on screen impacted how audience’s responded to the circumstances our main character was going through.”

In one of the film’s pivotal scenes, Cor exercised her world-class camera skills to artistically enhance the nuances playing out in the story. It came when Sammy first tells her new friends about her gender.

“I under lit it with a practical in hopes to show her gender ambiguity. The thought process in this scene was that her friends would see another side of Sammy for the first time, so the audience had to also see that,” Cor explained. “I studied portrait photography for that, and gender portraiture. It’s very subtle, and I would feel frustrated if someone came pointing it out to me, that they caught it. I lit it that way not for people to see my lighting choice, but for people to see another side of Sammy. And I believe they do.”

The film introduced Hernandez in the leading role and her efforts didn’t go unnoticed in the international filmmaking community. She won the Jury Award for Best Performance in a Lead Role at the 2015 KASHISH Mumbai International Queer Film Festival and the SIFFNYC Rising Star Award at the SoHo International Film Festival.

“Kudos to Ben who didn’t settle for less. He heard it didn’t matter if the actress was part of that world, but he was so sure it did, and stayed on the search till he found Kristina,” said Cor. “She was a kid and the story uncovered a lot of her own fears and insecurities. We were conscious we had to handle it with a lot of care. But her take of it, and because she lives that, elevates the story to levels we could not have achieved without her.”