Here’s a statement you won’t often read; this woman is really happy about becoming a vampire. Well…okay, actress Ana Roza Cimperman is quite happy about her role in Nympho’s Diary and all of the attention and praise the film is receiving. The title may be slightly misleading about this bad girl turned into a completely different type of bad girl, but the film has many unexpected turns; such as leading the audience into rooting for a cold blooded killer. Filmmakers and fans alike are always searching for a new twist or angle in the tried and true vampire formula; Savvas Christou has successfully achieved it in Nympho’s Diary. This film is a modern day yarn which introduces us to Amy and the pitfalls of romance, promiscuity, and the Nosferatu lineage. Many of the recent tales of vampires and their social interaction with humanity border on the ridiculous; often using excessive gore to make an impact. Nympho’s Diary takes a personal view of a vampire’s victim, addressing the mental and physical partition between mankind and the walking undead. The result is a film much more about how the transformation from human into vampire affects someone at the core of their being, in multiple ways. Cimperman’s performance in the lead role of Amy requires a level of physical movements and contortions that escalate throughout the course of the film, partnered with the emotionally agonizing process her psyche undergoes. 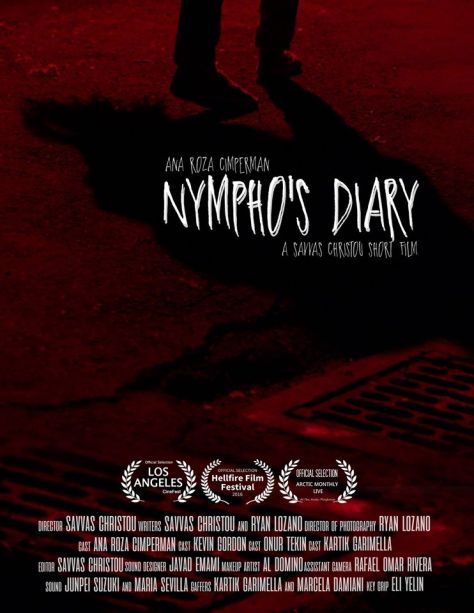 Nympho’s Diary has already accomplished a major achievement. Within less than three months of being released, the film has been accepted into 6 festivals including; the Roma Cinema DOC, Hellfire Film Festival, Arctic Monthly LIVE, Cyprus Comic Con Film Fest, Los Angeles CineFest, and the Fright Night Film fest. The good reactions of industry insiders who have viewed the film has led to a great deal of excitement surrounding Nympho’s Diary. Ana Roza Cimperman is particularly pleased as Nympho’s Diary is only her third US film and her very first filming experience in Los Angeles. It seems like a quick ascension for this Slovenian actress who only recently made up her mind to roll the dice and take the gamble on a career in Hollywood. Ana states, “I have been thinking about it for years but could never make that final decision because there were just so many things involved, including leaving behind people I care deeply about. Just before my birthday, I realized it was now or never and within two months I managed to sort out everything including finding a place in Hollywood, renting out my apartment in Ljubljana and getting the paperwork to transport my dog whom I just couldn’t leave behind.” Her entry into Nympho’s Diary was anything but normal for Hollywood films as she recalls, “I was invited to audition for the role. It was an audition with no dialogue but with very specific instructions so I was immediately intrigued. I had to prepare a one-minute performance of the character of Amy waking up and realizing she has a bite on her neck and then slowly starting to turn into a vampire-like monster.” Nympho Diary’s writer and director Savvas Christou was immediately taken with Cimperman’s interpretation and quick implementation of his specific directions. He confirms, “Not only is Ana a talented, inspiring, and passionate actress but she is one of the easiest to work with…even when situations are less than ideal. We had an overnight shoot in the cold and it was raining. Rather than complaining, she delivered the same high level performance with the attitude an approach of a consummate professional, which is exactly what she is. Any director would hope for such an actress in the lead role.”

Nympho’s Diary is the story of Amy wakes up in the middle of a parking lot with a strange mark on her back. She can’t remember what happened the previous night. She soon starts feeling sick. Her body starts changing and within minutes she is transformed into a vampire. Amy is not in control of her body and some unknown force compels her to go to her boyfriend’s house where she attacks and kills him. For the remainder of the night she walks around aimlessly. While eating her next victim, the memory comes back of the tall stranger that she brought home the night before and she suddenly remembers that it is he who made her into the creature she has become. Ana found Amy to be very intriguing and multidimensional rather than simplistic. The arc of this character allowed Ana to investigate and emote a discovery into an individual’s motivations and social interaction through Amy’s journey. Cimperman concludes, “Amy is a nymphomaniac who picks up men in bars and takes them home even though she is in a committed relationship. She is selfish and reckless. She keeps a diary of her conquests which later turns into a diary of her victims. She’s a very sexual person who enjoys being admired and wanted. Her transformation strips her of this and we see her as the lost, scared girl she really is. I wanted to show different layers of her personality and what is underneath it all – the basic human need to survive. I liked how free she was in pursuing her desires and her independence but she sometimes treats people like objects, simply there to satisfy her needs. Portraying Amy as vapid would be too simplistic; she is much more interesting if the audience finds a way to care about her. This film reminded me how we shouldn’t judge people but instead, try to think what it would take for us to end up in their place. That is what I took away from Amy and I feel it is also what the viewer can take away from it. In the beginning Amy is the antagonist but by the end of the movie we are all rooting for her.”

Even though Nympho’s Diary is a horror movie which focuses on character development, this genre always involves experiences during filming which actors don’t get anywhere else. Ana Roza lauds praise upon the crew and cast members she worked closely with (Kartik Garimella, Kevin Gordon – Dave the vampire who turns Amy), but tells of a uniquely horror movie experience with Onur Tekin who played Josh/Amy’s boyfriend. Cimperman reveals, “Onur is the Turkish actor who plays my boyfriend, whom I unintentionally end up killing and eating. He was very professional and patient as the scene where I am eating his face (in the form of jello and hard boiled eggs) took more than an hour to shoot because we could not get the perspective right as it had to look like I was leaning over him and tearing out his brains…not a common set experience for either of us.” Ana Roza Cimperman’s portrayal in Nympho’s Diary is far from common place as well. This Slovenian actress can also be seen in Eight and a Half Circles, Jefferson, Perception of Art, as well as numerous TV productions.