British producer Ed Thomas has been involved in some very creative television programs. James Corden’s Drop the Mic, American Idol, Sam and Mark’s Big Friday Wind Up (a two time BAFTA winner), are just some of the shows you’ll see on his list of credits. He remarks, “Celebrity Juice is one of the most creative roles I’ve ever occupied. It contains so many ideas in each and every show. I led a team in generating these ideas throughout four consecutive seasons. The show contains some of the most innovative and entertaining content I’ve ever been involved in. It truly pushed boundaries.” Thomas worked closely with a team of writers to script the show on a weekly basis while also managing a team of producers and overseeing all aspects of production. During his tenure as show runner for “Celebrity Juice” the program received the National Television Award, perhaps the pinnacle of recognition in British television. 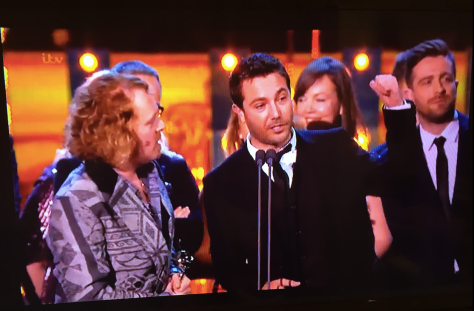 Great Britain has a somewhat different relationship and view of celebrity than the US. Both public and celebrities are not given the opportunity to take themselves so seriously and Celebrity Juice shines a light on this. Celebrity Juice is, broadly speaking, a comedy panel show meets quiz show meets game-show meets comedy sketch show. It features celebrity guests who appear on the show to play games and generally have an outrageously good time. The theme at the heart of the show is celebrity news. Everything is held together by the host and star of the show Keith Lemon (played by the incredibly talented Leigh Francis). Lemon is outrageous by nature. He swears, says vulgar things, and goes where others dare not go but with a charming manner that repels the very idea of taking offense at his comments. In reality, celebrities embrace the show and its host, often returning multiple times. Clips of the show continually go viral and result in immense promotion for those appearing on Celebrity Juice. Ed expounds, “We used to pride ourselves on coming up with outrageous content that would send Twitter into a meltdown. Most of my friends watched the show, not because I worked on it but because they were genuine fans. I used to love it when they said ‘I can’t believe you did that on the show last night!’ We would never settle for an idea that had been seen before; there always had to be a twist that pushed it to the next level. Whether it be games of a sexual nature (“Celebrity Dogging”) or naked extras invading celebrities’ personal space, we made sure each show always contained a moment that would make guest and viewers alike say ‘Did that really just happen?’  We’d have American guests on the show who were in utter disbelief of the things we could get away with. Jason Derulo couldn’t get over the fact that he could swear on national television and Nicole Scherzinger ended up getting her toes sucked by host Keith Lemon…which was all standard fare for an episode of Celebrity Juice. One of my proudest achievements was convincing international superstar DJ David Guetta that it was a good idea for him to get into a cement mixer (which had been made completely safe) and let us spin him round, all for the sake of entertaining television. He approached me after the taping had finished, looking quite menacing. ‘That thing you made me do with the cement mixer.’ he said in his extremely French accent, followed by a pause that seemed like forever, “…absolutely genius!’ I breathed a sigh of relief.”

Celebrity Juice began as a low budget experiment which eventually grew to its current status as ITV2’s biggest show, winning multiple awards including a BAFTA, a British Comedy Award, and 2 National Television Awards. Thomas recognizes that his time with this production was life consuming but also presented him with several lessons which have served him well, most notably that pushing the boundaries creates exciting and entertaining content. When constructed and presented in an unoppressive and light hearted manner, what can be off-putting becomes an opportunity for entertainers and audience to avoid cumbersome gravitas.