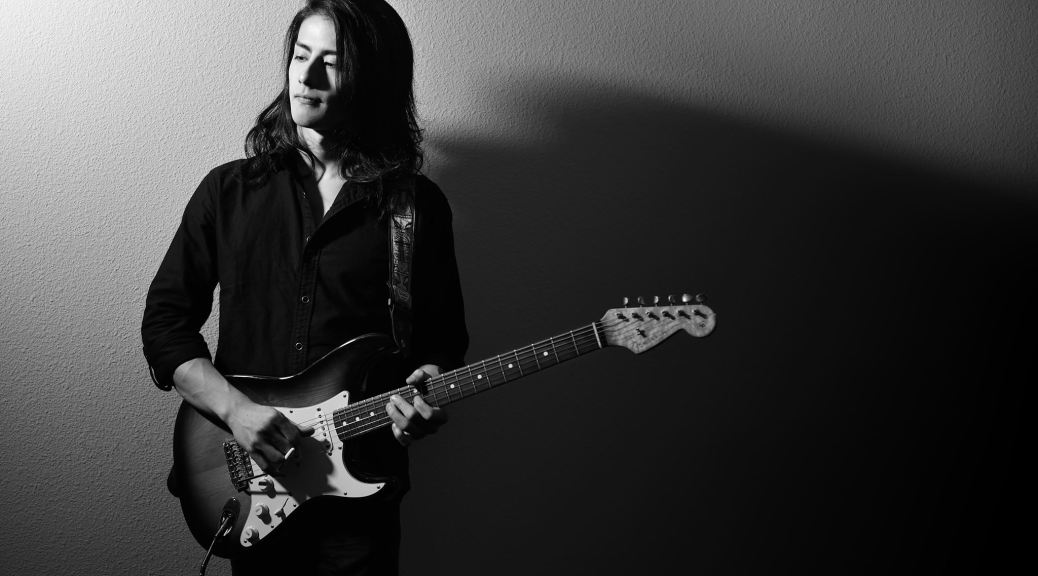 Yastuaka Nomura is lucky enough to love what he does. There is no “back to work grind” that so many face on a Sunday night for him, or dull days filled with no real feeling of accomplishment. His job gives him joy, a sense of purpose, and adrenaline rushes. That is the life of a professional musician.

Having worked with several bands, such as Mammoth, Squanky Kong, and Voodoo Kungfu, Nomura has worked on a wide variety of genres for a professional musician. He enjoys this, not wanting to pigeon-hole himself into one specific type of music. The guitarist and bassist is recognized for his undeniable versatility and talent, which is why when the Indie Rock/Alternative band Smokey Lenses was looking for a bassist, he knew he had to be a part of it.

“I wanted to work with Smokey Lenses because I liked the songs, but also because the music they play is something I usually don’t get to play, even though I always liked listening to that kind of music and I always wanted to play it with a band with original material. I was very excited when they asked me to play in the band,” said Nomura. “I usually don’t get to play the kind of music that Smokes Lenses plays so I was inspired to do a completely different musical approach than I usually do in my other projects. I was definitely a new challenge for me.”

Initially, Nomura had heard the band was looking for a new bass player for their album recording through his friend Aliyar Kinik, the drummer of Nomura’s band Mammoth. The band’s drummer needed a substitute and Kinik was filling in. He mentioned to the band that he new a good bassist, and after hearing Nomura, they knew they had to have him.

“Recording the album was great. We recorded total of 12 songs and I’m happy with all of them. The songs were already great before arranging but I think the work of the band is making the songs sound even better. I can’t wait for the album to be released and to listen to it,” said Nomura.

When recording the album, they did all the basic tracks live at once, with everyone in the same room. This is not a common way of recording. Because of using this style, the tracks have a lot of energy and organic feeling, according to Nomura. Recording like this allows there to be more energy, with better dynamics and conversation between each band member, just like a live show.

“It was awesome. I barely knew the band members at first but we got along very quickly. Everyone in the band was very easy to work with and fun people. We always had a great time at the recording sessions. I cannot wait to work with them again,” said Nomura.

The album is expected to be released later this summer, which is highly-anticipated due to the release of the first single Candle Glow, which was released May of last year. The single received positive reviews and was featured by popular music blogs like Speak Into My Good Eye, That New Jam, and Revolution Tunes.

“Candle Glow is definitely one of my favorite songs from this album. It has a nice catchy melody and lyrics. I’m really happy with the recording too,” said Nomura. “The success it has seen since being released is great. We started off the album recording with this song. It was the first time I could even play with the band since our schedule didn’t match before the first recording session, but I think we were already locked in at the first session.”

As a guitarist and bassist, Nomura typically plays progressive rock, metal, funk, R&B, jazz, and fusion. He says progressive rock and metal require a lot of technique, with the sense of odd meters and solid timing. Funk and R&B require a nice 16th note time feel and a good sense of call. Jazz and Fusion require great skill with improvisation, nice swing, 16th note feel, pocket and of course sophisticated technique. The music that Smokey Lenses plays is far different from these genres. It doesn’t require either an amazing technique or the skill of improvisation but a good time feel/pocket on mostly 8th note beat, importantly the skill to stay on the groove and not overplay, technically speaking. Many musicians so familiar with other genres would have found themselves overplaying and not staying on the groove, which would interfere with the vocal melody. This was not the case for Nomura. He even tried to sing on everything he played on bass. His adaptability was appreciated by the band, who may not have been able to make the album or see the success that they say with Candle Glow without Nomura.

“Yasutaka is very professional and easy to work with. The work process went smoothly and he produced exceptional results. Yasutaka is a professional musician, so he understands the importance of being excellent at his craft and has a dense knowledge of music theory. He is respectful, focused, observant and learns extremely quickly,” said Singer and Guitarist Adam Oberst.

With talent like this, there is no doubt Nomura will continue to come through our speakers for years to come. Listen to Nomura’s work and Smokey Lenses’ song Candle Glow here.

Finding his musical talents early on in his youth, Philip Nielsen, the highly-skilled bassist from the bands Grit, Swarming Orchids, PixLips, It Came From A Lab and Tic Tic Boom!, embarked on his musical journey by first honing skills on the piano. With musicianship in his blood, Nielsen easily transitioned from the piano to the bass, but his extraordinary skills as a musician do not stop there, he also plays the upright bass (double bass) and synth keys.

“I play electric bass, which is my main instrument and I’ve been playing that for about 17 years. I’ve been playing the piano/keyboards on and off for at least 20 years, and I also play upright bass,” said Nielsen. “I started experimenting with the upright bass 6 or 7 years ago, so far it has brought the most attention to my work as a musician, which is a little ironic since it’s not my main focus”

Originally from Copenhagen, Denmark, Philip Nielsen toured extensively throughout Europe with the reggae/ska band PixLips and the punk band It Came From A Lab before later moving to Los Angeles, California where he would join the bands Grit and Swarming Orchids.

Aside from Nielsen’s vast knowledge of music, the commanding nature of his stage presence not only helps to raise the energy of the audience, but it ensures that all of his shows, regardless of which band he is playing with, are consistently exciting and never boring. While a band’s front man, or woman for that matter, generally gets the most attention in the media, the spotlight was never a factor for Nielsen; it has always been about the love of the bass.

“I like the way the bass glues the song together. My uncle who is also a bass player, once said to me that a song first starts when the bass begins to play after or during the intro,” said Nielsen. “During my years as a bass player I completely see what he meant. It just feels right for me.“

Nielsen recently finished recording Grit’s debut EP “LA Don’t Love You,” which is scheduled to be released in January 2015. Fusing together the southern rock, blues and punk genres, the song ‘Look Away’ off Grit’s EP was selected to be included in the film The Dust Storm, which is scheduled for release next year.

A film about one man’s chance to rekindle love with the one that got away, The Dust Storm stars award-winning Irish actor Colin O’Donoghue from Wild Decembers, The Rite, Home For Christmas and the shows Once Upon A Time, Love Is The Drug, The Tudors, Fair City and Jim O’Heir from the films Ed, Accepted, Safe Harbor, Comedy Hell, Welcome to Paradise and the hit comedy series Parks & Recreation, Curb Your Enthusiasm and Dharma and Greg.

Aside from Nielsen’s extensive background as a bassist in rock, reggae and punk bands, his work with indie synth band Tic Tic Boom! serves as further proof of his diverse musical talents.

Tic Tic Boom!, which is lead by Leilani Francisco & Mike DeLa, Philip Nielsen on electric bass and Joey Ponchetti on drums, released the EP “It’s the Heart That’s a Fool” in late 2013. Nielsen also plays synth keys intermittently with the band. Tic Tic Boom!’s music video for the song ‘How It Ends’ off of the EP was included in a segment on Blip.Tv by Style-City Music, and was also featured on Artist Direct’s website and Frequency.com.

Neilsen is also known for his work as the upright bassist in Drake Bell’s music video for the rockabilly inspired song ‘Bitch Craft.’

“I have always loved early rock and roll music like Elvis and Neil Sedaka among others, the upright brings the right sound and authenticity to that kind of music, much like certain electric basses have a better tone for certain styles,” explained Nielsen.

The song ‘Bitch Craft’ is off Bell’s third album “Ready, Steady, Go!,” which was released earlier this year and debuted at #32 on the Billboard Top Independent Albums charts. Additionally Bell, who has won three Kids Choice Awards in the US, as well as three Australian Kids Choice Awards, a Teen Choice Award and an ASCAP Film and Television Music Award, is known for his work as an actor from the hit Nickelodeon shows Drake & Josh and The Amanda Show, as well as the films Jerry Maguire, High Fidelity, A Fairly Odd Summer and many more.

Although Nielsen notes the upright bass as being somewhat more challenging than the standard electric bass, the skills and stamina he has developed over the past 20 years allow him to transition between both instruments with consistent grace and perfect execution.

“The main differences between the upright bass and the electric bass is that the electric bass has frets, so I would say that the upright bass takes more discipline regarding hand positioning for the right intonation and playing in pitch. It’s also a lot more physically demanding, the size of it combined with the fact that it’s an acoustic instrument really makes you work to bring out the right tone,” said Nielsen.

Check out Philip Nielsen on the upright bass in Drake Bell’s video for ‘Bitch Craft,’ below.