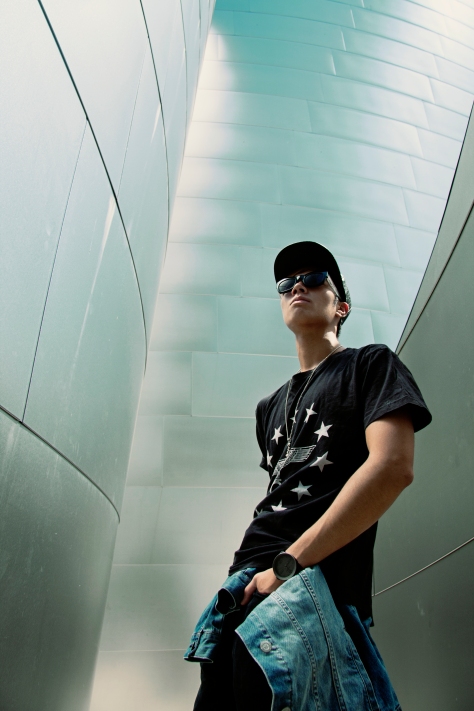 Rock & roll has an almost supernatural power—it reached half away around the world, took hold of guitarist Fan Tsz Him and won’t let go. But the Los Angeles based musician, best known for work with YouTube sensation Jason Chen, wouldn’t have it any other way. The Hong Kong-born Him, known professionally as Teddy Fan, arrived in Los Angeles in 2013, completed a two year course at Hollywood’s famed Musician Institute and, upon completion, was immediately offered a position there as teaching assistant.

Fan is an in-demand musician who specializes as a guitarist. His versatility has well served him, leading him to steady work with the disparate likes of Los Angeles-based contemporary country singer, Christie Huff, Mexico City born singer-songwriter Daniel Sobrino and Chinese singing stars Lilia Duan, Yogo Jiang—an international roster of talent, each trading in very different genres, a fact that underscore’s the guitarist’s impressive flexibility and skill

“To me, watching a rock band playing on stage was always one of the coolest things ever,” Fan said. “When I was 12 years old, my school required every student to either learn an instrument or decide on an art form to study, so I chose guitar, and that was the first time I played music.”

He quickly mastered the instrument. “Of course, at that time I was only playing for fun, but, from the start, I really liked to do it. And I was not really a ‘school person,’ I didn’t make very good grades on my school work, so that was when I started thinking about making music my career.”

Following his graduation, Fan hit the ground running and was able to gain significant professional traction almost immediately. “It’s a long way from where I first started—I never thought I’d be traveling all around the world because I could play guitar!” Fan said. “So far, I have played in so many different venues, everywhere from Los Angeles to Chicago to Boston and in casinos and auditoriums all over Asia.”

Fan is adept and astute not only as a musician but also in the way he conducts his professional career path, eschewing the near-extinct business model of major label record industry in favor of a new, web based digital-age approach. Collaborating with Los Angeles independent artists and established international stars like Jason Chen, the Asian pop YouTube sensation with 1,300,000 subscribers and astronomical multi-million video views, Fan navigates this exciting territory with an instinctive skill and natural grace.

“The job I am proudest of definitely, has been touring with Jason Chen. I am a long way from where I started,” Fan said. “In Asia, it is really hard to get support for doing music as a career, but ‘never give up’ is my first philosophy–without that I wouldn’t be here today.”

Fan’s impressive cache of talent is matched only by his drive and perfectionism, as his mentor, producer-arranger-composer and Hollywood Musicians Institute Vocal Program Instructor Katsuya Sezaki detailed.

“Teddy has always displayed a high degree of integrity, responsibility and ambition. He has a very strong work ethic and has shown tremendous improvement as an arranger and guitarist,” Sezaki said. “The results are clear to see–now, he’s playing for Jason Chen’s shows at  all the big venues, and has successfully done many sessions for artists I’ve produced.”

“He’s always had a great presence on a stage as a performer. Teddy started out as pop-rock guitarist, but was always ready to try new styles–folk, blues, country, and funk,” Sezaki said. “The level of his musicality has improved significantly, and now he constantly receives calls to play with Chinese celebrities and local artists who are seeking a ‘great guitarist.’”

With outstanding merit already established, Teddy Fan is in that sweet spot where he steadily works as in-demand session and touring player, yet he is poised to one day make the big break out as a solo artist.

“Even though I am mainly known a guitarist now, I really want to be a singer-songwriter too. Most importantly, to me, is doing the music that I like rather than doing music the market likes. Trust me, it’s no fun at all to trying copy the music other people like all day,” Fan said. “My goal is take the knowledge and experience that I learned here in the U.S. back to Hong Kong and create a whole new style. The music industry in Hong Kong is dying, there is no quality new music and people are so tired of hearing only pop. So, I hope I can save the industry and make some real impact back in my hometown.”