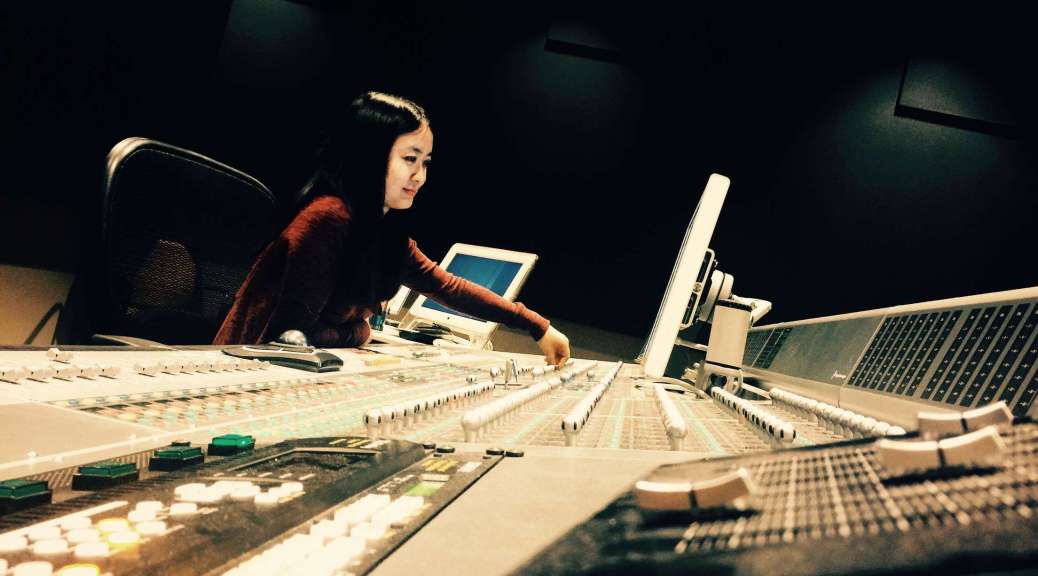 One of the key components of any renowned artist is the ability to achieve popular success while simultaneously keeping their artistic vision intact. This is no small accomplishment and can be quite a balancing act. The yin and yang of this  (whether it is music, painting,  film, etc.) is required to both satisfy the masses as well as lift the art form to new places. When executed at its highest level, art can challenge us to consider our thoughts on love, life, and the world. Technology has created a world in which we are more in touch with other cultures and lifestyles; it seems intuitive that it would bring the elite of the artistic world into a closer community. Sound Designer Veronica Li is an example of this very ideal. She has made a name for herself as a talented and in demand sound designer in Hollywood. Working on box office hits like Michael Bay’s 13 Hours: The Secret Soldiers of Benghazi (grossing 53MM) as well as artistically praised films such as STAND (for which Li won the Outstanding Achievement in Sound Award at the First Film Festival) has displayed Veronica’s ability to match the tone and scale of her work to any film and assist the filmmaker’s desired emotional impact.

Ask any director what they require to make a great film and they will tell you that it takes a highly skilled and talented team in order to achieve their vision. Ask Guan Xi, the director and writer of Mandala, about Veronica Li and she will reinforce that statement. Mandala received multiple nominations at the 2015 Los Angeles Independent Film Festival Awards including a win for LAIFF’s Best Foreign Language Film in July, as well as being recognized by the film community in Italy and India.  Guan Xi states, “Veronica’s work was critical to the success of the production, as evidenced by the numerous official selections to the industry-renowned film festivals in the U.S. and around the world.” Veronica’s achievements on award winning films like Looking at the Stars captured the attention of Xi while they were working on this film and solidified the director’s resolve to enlist Li to work on Mandala. Remarking on the experience, Guan Xi comments, “Veronica’s work as a Sound Designer and Sound Editor on the production was absolutely crucial, as the sound in a film is one of the most important facets of filmmaking. Mandala was critically lauded by some of the industry’s most prominent directors and producers. The Academy Award-winning documentary filmmaker, journalist, and novelist Mark Harris called the film ‘Beautifully shot and impressively produced…’ while Amanda Pope, the Emmy Award-winning director called the film ‘A visually exquisite story of an artist torn between her modern life and her Tibetan Buddhist culture.’ Many more luminaries in the field have voiced their praises for the film.”

Mandala is a timeless and universal story of the loss of a loved one and the attempts of a female artist to overcome her pain while at the same time reconnecting with her roots. The story grounds itself in the physical world and its day to day realities, while the emotional upheaval creates a bridge to a metaphysical world. Only by dealing with the less familiar “higher plane of consciousness” does the heroine stand a chance at living a life once again free from sorrow and unattached to the tragedies life can bring. The sounds required to make viewers accept both visions of life as reality are equal to the demands of the visuals…if not even greater. Li is highly aware of the subtle yet highly important nature of her role professing, “I think sound design helps to bring a film to life. It definitely makes the environment more believable. Most of the sound designs in Mandala are so subtle that the audience won’t notice them but they will help to set the proper mood. They can really sell the shot.” The dichotomy of the setting of New York City’s Gotham and Tibet’s peaceful mysticism is stark and the sonic environment must reflect this in a “not too obvious” manner. Li’s expertise was called upon to meet this lofty goal. Guan Xi praises Veronica’s ability to exceed expectations recalling, “I needed the sound of the film to be at an exceptionally high-quality level. Veronica perfectly combined and contrasted Tibetan and NYC sound elements together, and as the Sound Designer and Sound Editor, she spent countless hours collaborating with the Composer, working seamlessly on the sound design and score of the film. Not only was I able to entrust Veronica with the sound design and sound editing of Mandala, but what most impressed me was the fact that she really understood the story and my needs as the director.” Veronica used her talent as well as some creative ideas to help link the main character’s two geographic anchors of NYC and Tibet. Li reveals, “In addition to contrasting the two places, we also wanted to connect them. Helena is someone who belongs to Tibet but is currently trapped in the city. We decided to use a very subtle Tibetan musical cue whenever we saw Helena’s Tibetan painting. The horns of the cars passing by would gradually change to Tibetan musical bells, as if Tibet was calling from inside Helena whenever she and Lobsang Lama walked by each other on the city street.

Authenticity was paramount in the approach to producing Mandala. With the exception of the lead roles of Helena (Sarah Yan Li, also know for Fast & Furious 6) and Paul (Omar Avila, also know for The Punisher), all the other lead actors were Tibetan. To ensure that the original Tibetan Buddhist culture was presented correctly, the production team consulted eight living Buddha about every detail in the movie. Tibet contains the highest plateau in the world making it quite difficult for non-Tibetans to do strenuous activities. Even though the filming could have taken place at a less “difficult” location, the audience needs to feel, see, and hear the real Tibet. In the rare cases that a modification needed to be done, they were delicately handled with the highest level of professionalism.  Since shooting is forbidden in a real Tibetan temple, a temple was recreated in Los Angeles for filming interiors. Editor Cheng Fang describes his experience working on the film with Veronica commenting, “In Mandala there is a scene in which the female character is taking a test in a Tibetan Buddhist Temple to see if she is the reincarnation of the Rinpoche that passed away several years ago. During the scene, the character has several ‘visions’ and eventually has a mental breakdown. We finished the picture editing of the scene but everyone knew there was something missing. The picture itself was just not powerful enough. The mental breakdown of the character seemed to end abruptly. Veronica went to work on it. After she finished, we viewed the scene again…it was now so powerful! Veronica successfully combined the sound of Tibetan music instruments with mysterious murmuring; transforming the mental journey of the character into a crescendo as the music got louder, resulting in an intense ending.”

When a poem that was already recorded was unable to fit due to time constraints, Guan Xi once again called on Veronica Li and her expertise. The director explains, “Veronica helped me choose the certain words from the poem, and reorganize them so they could fit the style of the movie but still deliver the message I wanted to tell. To be able to change such an important sequence in the film, yet stay true to a Director’s vision is one of the most difficult tasks in filmmaking, but Veronica was able to flawlessly execute it.”

Veronica Li and the message of Mandala share a few striking similarities; each is the story of a woman from one culture, living in another culture, striving for excellence in the arts, all the while using the best of each part of the world to tell the universal stories we all share.