No matter how many times he crosses the boards on stage or hits his mark in front of a camera, nerves and adrenaline are expected and even welcomed in the life of a performer. Still, as dancer Nick Phillips knows first-hand, some extraordinary career experiences go beyond normal nerves and excitement, especially at the start. Performing on stage with Oscar-winning actress Hayley Mills has been one such highlight for Phillips.

“To be honest I was incredibly nervous the first time we rehearsed,” recalls Phillips, “but [Mills] was so lovely and supportive the nerves subsided very quickly and by performance time I felt very comfortable and relaxed.”

Legends, which toured Australia in 2015 is a comedy starring Mills and her sister Juliet Mills as two rival film stars. Phillips, an in-demand dancer from Melbourne, stepped into the role of Boom Boom Johnson, a high-energy part that called upon Phillips’ remarkable versatility. He had to dance, perform acrobatics, beatbox, rap, and deliver dialog with comedic timing that held its own opposite two veteran actresses. 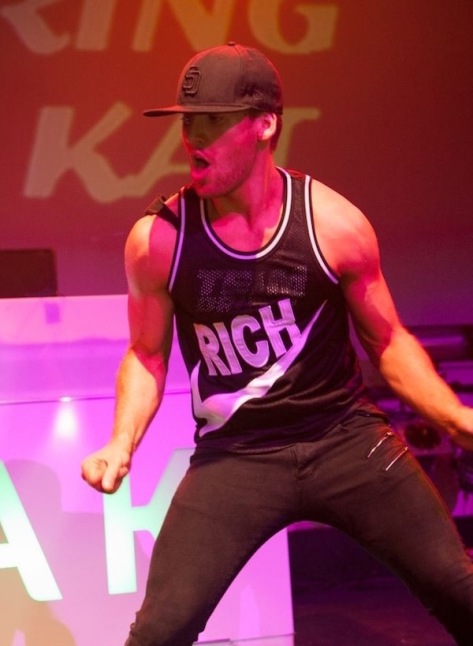 “To work with [the Mills sisters] was truly a privilege. I learned a lot from them about performance stamina– they were able to hold the audience’s attention for two hours while on stage practically the whole time.”

To wow a seasoned actress like Hayley Mills, is surely a noteworthy accomplishment. However, that’s exactly what Phillips achieved when he took on this character with the cheerful enthusiasm of one who lives for the challenge of live performance.

“When he had to step in and fill the breach left by a fellow actor,” remembers Mills, “he did so with alacrity and total professionalism, was word perfect, and danced brilliantly– we were all thrilled by his performance and very impressed.”

High praise aside, touring a show can be grueling. According to Phillips, traveling between cities is frequently lonely and it is common to experience some homesickness. Not to mention, the challenge of keeping the show fresh.

“When you’re doing eight shows a week, it can be hard to give the same high energy performance every night, especially with a character like Boom Boom,” says Phillips. “It can also take quite the toll on your body. I had to make sure I was always warmed up properly.”

Fortunately, a well-trained professional is accustomed to hard work. Phillips, who has gone from a young breakdancer with a relatively late start in any formal dance training to a sought-after performer for stage, television and commercial events, has shown great mastery of both the physical and mental challenges of the work. This natural ability may have much to do with his attitude.

“[Phillips] is a great company member, being positive and enthusiastic,” says Mills, “qualities that enhance the experience for everyone.”

Though playing a very specific role as opposed to performing in an ensemble was different for Phillips he looks forward to tackling more roles that stretch him as a dancer and performer. And, though he loves the accessibility and experience of film and television, he enjoys the unpredictable response and instant validation of live performances like the one he gave in Legends.

“My favorite part was most definitely the surprise element. From the moment Boom Boom first storms onstage to the firing of his confetti-filled gun before he busts into a strip dance, the audience reactions are absolutely priceless.”