Yu Hao Su is Harvey Keitel. Okay, maybe he isn’t the Oscar nominated actor but just like Keitel’s character Mr. White in Quentin Tarantino’s Reservoir Dogs, David (as Su in known) has a reputation for being a “fixer” in the film industry. When the 2016 Action/Thriller Resurgent needed to do a reshoot for scenes which take place in Afghanistan, David was contacted to contribute his exemplary producing skills. A reshoot is so crucial to a film because it has to match the existing footage in so many ways as to seem and feel that it was part of the original filming. Any deviation from the tone and mood of the existing principal footage could derail the already massive amount of work a production has executed, to say nothing of completely distracting the audience. As the editor of this film, no one is more qualified than James Stiegelbauer to comment on the work of David on the reshoot. Stiegelbauer proclaims, “Yu-Hao was calm under pressure. When our director made last minute script changes, everyone was concerned it couldn’t be pulled off but Yu-Hao didn’t even flinch. He made a few calls and quickly got everything that was needed. Yu-Hao is detail oriented, resourceful, and is never afraid to get his hands dirty. I would ask him to work on every job if I could. We could not have finished Resurgent without his hard work. He coordinated with the actors, locations, and crew quickly making all the necessary arrangements to meet our needs. As an Editor, I’m not on set, but I do need to be in constant communication with the director and cinematographer. Yu-Hao was crucial in this communication. This ability to be able to keep the work flowing even as unforeseen factors arise and must be dealt with…that’s what the truly great producers possess.”

Resurgent is a film which depicts the story of a mercenary who must come to terms with a botched mission in order to return to the battlefield. Max, the main character (played by Manny Cartier) is suffering from the pain of his partner who has died in a military missionary with him in Afghanistan. The action and military theme of this film necessitates stunts, something which David is familiar in dealing with. Setting the table in a safe manner for these stunts is highly important to him. He notes, “We have a lot of stunt in the film. I need to make sure the stunts are done right in order to make sure the actors are completely safe. We not only have the stunt coordinator on set but also a set medic. This may seem obvious but every little situation must be planned for regardless of if it ever needs to be used. We also have a weapon wrangler on set to make sure people are aware on set, even though the weapons are just props. My job is not only to make sure the stunt scenes are well-planned but also to make sure the set is safe. I take stunts very seriously. Because it’s an action film with a lot of stunts (and we filmed in a dessert to cheat it as Afghanistan) I needed to make sure our production was a self-contained unit with everything we could possibly need at a moment’s notice. It’s not easy to shoot stunt scenes with weapon props in the desert. I need to make sure everyone is safe not only because of the stunt actions but also the difficult shooting environment.”

For those of us who don’t work in the film industry, it might be hard to understand exactly what a producer does on set. For those who do work in film, it’s difficult to overemphasize the impact a producer has on any film. A producer’s role can be described as parent, police officer, president, healer, and best friend…all in one person. A producer is the person who supplies what you need even before you understand and comprehend that you need it. It’s a conflicting situation for most producers. They love what they do but they rarely are afforded the opportunity to lose themselves in the fun of watching the movie magic they help to create. David states, “Being in charge of the reshoot for Resurgent was fun, there’s no mistaking that. I just had to always be thinking a few steps ahead. There is really no time for losing yourself in the moment. It’s interesting to shoot an action film. The stunt sequences with the stunt coordinator are fun and look amazing in the film. Watching that when the film is finished is fun. There are always challenges that are unique to each film. The desert location we filmed didn’t have a phone signal or Internet. It’s very hard to run a set without this technical stuff. We ended up planning it well and got the work done in spite of this. There is nothing to complain about for me. I’m so excited to be a part of this industry. To focus on the story and tell the story from an essential human’s point of view. I believe truth and humanity is the key to delivering a story everyone can understand and connect to.” 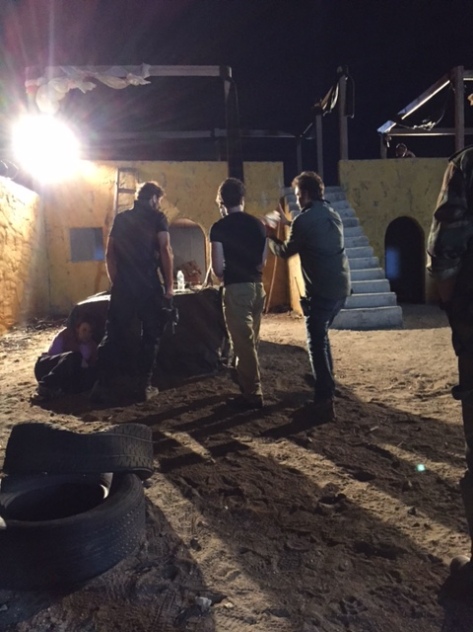