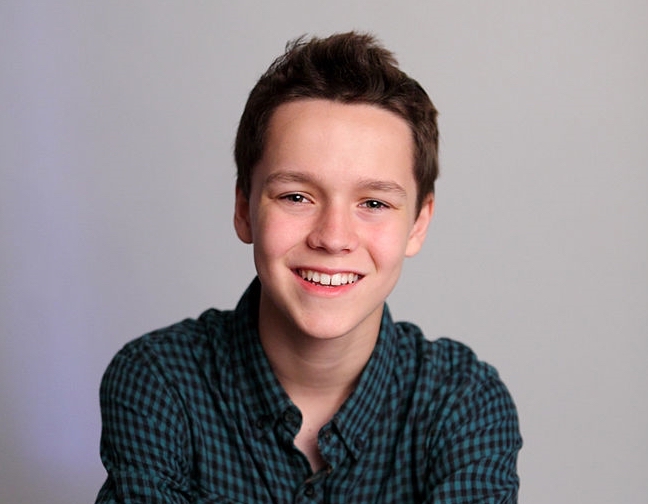 Most successful actors will tell you that they do not act for the fame or for the fortune, they act for the thrill. They act because their job lets them connect with dozens of strangers, allowing them to contemplate the various aspects of the human condition together. They act because it is their creative outlet and their chance to take an audience along journeys they may never otherwise experience. They act because it keeps them alive. It doesn’t matter if an actor is young or old, new to the screen or a household name, actors act because unlike other professions, theirs allows them to escape reality and explore their souls before the eyes of the world. For these reasons and many more, Liam Casey Sullivan acts and with his rare combination of passion, talent, and perseverance, he is likely to live before a camera for decades to come.

“As an actor, I am required to delve into the bank of my personal experiences and surface the same feelings or emotions that my character is experiencing at any given time. Through respective research and seeking sympathy for the person I’m playing — however challenging that may be — I aim to grasp a complete understanding of their point of view so that I may be able to adopt it. Once I do this, I then embark on understanding their relationship with others by sourcing parallels from people I know in my life and from other stories. Although I may not have shared the same experiences and relationships as my character, I can revert to alternate moments I’ve lived in order to render even the slightest bit of those same reactions and capitalize upon them so I may appear as though I have lived them,” tells Sullivan.

Sullivan’s remarkable ability to ease in and out of character is arguably his greatest asset, and something he has done successfully for a number of different on and off screen productions, such as for the hit teen drama Degrassi: Next Class and The Girlfriend Experience. What tends to differentiate Sullivan from his competition, however, is his ability to adopt and portray traits that are entirely different from his own personality. Not only does he do so exceptionally, he thoroughly enjoys playing characters entirely unlike him. In fact, he considers playing Dougie in the Canadian film, Mary Goes Round, to be the highlight of his film career solely because he had the opportunity to play a conceited, selfish character.

Mary Goes Round follows the life of Mary, a substance abuse counsellor with a drinking problem. After being arrested for drunk driving and losing her job, Mary returns to her hometown where she learns that her estranged father is dying of cancer and wants to form a bond with Mary and her teenage half-sister that she has never met. In the film, Sullivan’s character Dougie conceals his own insecurities through a mask of obnoxiousness and arrogance. His lack of true friendships and general loneliness cause him to fiend attention and subsequently irritate those around him.

Ultimately, Sullivan’s character proved instrumental to Mary Goes Round’s great success and his performance on screen, in conjunction with his input behind the camera, highlights just how valuable he can be on any given project. After premiering at the Toronto International Film Festival in 2017, Mary Goes Round was featured in several other festivals across North America. In addition, it won three prestigious awards, including Best Narrative Feature at the Annapolis Film Festival in 2018 and The Panavision Spirit Award for Independent Cinema at the Santa Barbara Film Festival in 2018.

What Sullivan enjoyed most about playing Dougie was the fact that he was able to explore and portray a personality type that he hadn’t ever depicted before. In addition, the film’s director, Molly McGlynn, was open to experimenting with the script and offering her cast an opportunity to rework and modify their scenes as they saw fit. Under these circumstances, Sullivan was able to allow his creative nature and unique style to flourish and he quickly proved himself invaluable to the production. Ultimately, however, Sullivan was honored to have taken part in shining a light on an extremely prevalent and relatable topic. Knowing that he was able to take part in a broader conversation about addiction left Sullivan feeling fulfilled and hopeful that audiences would be able to look at this social crisis from the unfamiliar, but interesting angle he helped create.

“In all, I liked that this story rings true to how much of an ongoing struggle battling addiction can be. A drinking problem has the power to haunt you for your entire life and this story is unforgiving when it comes to highlighting the truth and the daunting reality of addiction. This story not only spreads an awareness to the public but also gives a healthy sense of hope to those who may be facing similar problems as Mary and it felt great to have played a part in that,” Sullivan concludes.