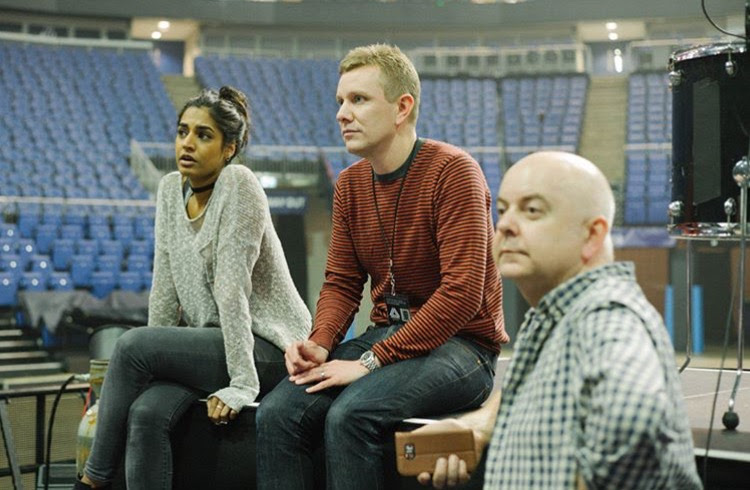 Nothing is more exciting for a music fan than getting tickets to see your favorite artist live in concert. The feeling of your body vibrating to the bass of a beloved song in a giant arena is simply euphoric. However, when enjoying the experience, it is easy to forget how many people it took to make the concert so incredible. Not only is there the talent, dancers, and band that one can see, there are also many that have worked tirelessly behind-the-scenes. Rupa Rathod is one of those people. As an industry leading motion graphics designer, the intricate visuals displayed on the giant screens of the show are her masterpieces.

Having worked with several iconic musicians, such as Shania Twain and Kylie Minogue, Rathod’s work has been seen and appreciated on a global scale. She loves what she does, not only working alongside some of the world’s biggest stars, but also being able to merge her passions for music and design.

“Everything catches my eye; shapes, colors, photography, art and perspective, they’re all influences. I’m constantly working out how to turn anything I see into something graphical, abstract and moving. I’m very practical and hands on so my interest in design and art have always been very much a part of who I am,” said Rathod.

Two years ago, Rathod saw great success with her work on the “Wild, Wild World Tour” for the popular band Bastille. The global tour allowed the motion graphics artist to work closely with award-winning Creative Director, Rob Sinclair, band management, and the band themselves to create and produce the screen content with LA based production company and studio, Blink.

“I developed a good working relationship with the band. It’s the notion that you understand their world and so you have their trust on something so important to them. It’s what grounds me the most during these projects and what I aspire to always have with artists and bands,” Rathod described.

Loosely set in a slightly playful dystopian world, the vision for the tour visuals was very specific but also required a lot of collaborative development. The brief for this tour was the notion that big brother was watching and controlling you, set in a future where the whole world was ruled by a fictional corporation, World Wide Communications. Rathod’s understanding of Sinclair and the band’s vision was trusted by the entire design team instantly.

“It’s unusual for a tour, especially with an indie band to have such a strong narrative, so I was sold from the moment I read the concept. In my mind, there was no end to the amount of scenarios that could be created in this dystopian world. I was completely submerged in this environment and pitching my designs, having them approved and then being able to develop all the ideas into real working visuals was hugely rewarding,” said Rathod.

On a tour such as Bastille’s, the set design is always the beginning of the process. Rathod and her team began producing strong concepts and inspirational references. Once the setlist was completed, Rathod got to work.

As Producer, her role was to develop the initial brief, and oversee and direct the team of animators and visual artists. This involved digging a bit deeper into the references and going back with an initial design. Once her approach was approved, she collaborated Blink’s team of motion graphics artists to bring the visuals to life.

As she is so hands on when it comes to the visual aspect of the production, Rathod is ideally placed to see the project through the final stages of rehearsals. For her, it all comes together when she gets into a production rehearsal with the full band, lighting and all departments working together. As a creator of visual content, her job isn’t just to make great visuals, it’s to create content that’s cohesive with a huge live concert spectacle. Some of the best video moments in the show were not conceived until this rehearsal block, so a big part of Rathod’s job was turning ideas around sometimes overnight to test them on screen the next day. This also allowed her to form a good relationship with the band.

“I worked with Rupa on the “Wild World” world tour across 2016 and 2017, where she was in charge of creating all the video content for our live show. Her creative abilities are second to none and to be able to interact with her on an artistic level was a hugely fulfilling experience. We hope to use her again and again during the next touring cycles. She is without doubt one of the best in the industry at what she does, quite apart from being one of the nicest,” said Dan Smith, the lead singer of Bastille.

Rathod stayed on this tour for the first few shows, which allowed two weeks to tweak and change content prior to the band’s first big night at the O2 in London. Seeing the fans’ responses from her work made the entire experience even more worth it.

“The reaction from fans as well as reviews acknowledged the visuals I produced and was a welcome recognition of how important the visuals are to the overall concert experience. It’s a completely multi-sensory experience and seeing it through from start to finish is always the most rewarding part. It’s always such a priceless moment when you see it go live, a feeling that I don’t think will ever leave me,” she concluded.

To stay up-to-date with Rathod’s work at Blink Inc., check out their website.