In the realm of film and video, producer Beatriz Browne is nothing less than a dynamo. Whether she’s working on television mini-series or an indie documentary, her comprehensive approach, natural flair for storytelling and spontaneous, on the spot troubleshooting skills have earned her a reputation as one of the most reliable and fastest rising forces in her field. Currently riding high at the popular online parenting brand Fatherly, Browne’s innovative series concept, ‘My Kid The . . .’ which explores the unique talents of gifted children, is the latest step forward in an impressive career as a video producer.

“A producer, quite literally, does everything from head to toe,” Browne said. “So, a producer, particularly in a media company like Fatherly, is basically in charge of everything that goes into making a video. I’m in charge of content ideation and pitching, thorough research, finding stories to tell, making sure we can have access to them, and planning everything up until the shoot date. We go out and shoot it ourselves, direct it, bring it back to edit and distribute it to our platforms.

The enthusiastic, ambitious Browne’s fast moving, far reaching methodology is the result of her culturally rich international background and extensive training in a host of creative and intellectual disciplines.

“I was born in Rio de Janeiro, Brazil and since the age of four I had been working in the entertainment industry,” Browne said. “When I was 10, I moved to Shenzhen, China with my family, lived there for about four years and then I did my high school years in Dubai. So having Portuguese as my first language, I was fortunate enough to also learn English, Mandarin, Spanish, and a little bit of Arabic throughout my life. Eventually, I decided to come to New York City for college and now I’m living in the city that keeps on inspiring my work.”

This characteristic whirlwind of activity, from her early start as a child actor through to her current role as producer, included studies in a broad variety of fields.

“I have a Bachelor of Sciences in Liberal Arts, which is a somewhat deceiving title as I had the freedom to design my own major.” Browne said “I was focusing on innovative storytelling and languages and that basically consisted of a lot of film classes—fiction, non-fiction, technical, history, philosophy of languages, and media studies classes. A lot of my most important training, however, came from being on set and helping out with multiple independent films. Aside from that, I have taken numerous storytelling and journalism classes in several prestigious places.” 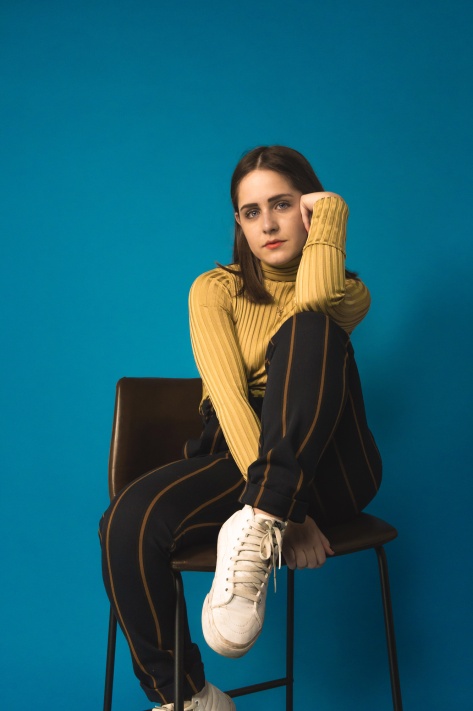 Browne loves nothing more than telling stories, a fact reflected in the singular concept behind her ‘My Kid The . . . ‘ series.

“The goal of the show is to feature a prodigy child in each episode,” Browne said. “It explores the challenges and experience of parenting a child chasing their dreams despite the odds. The show was formatted to be a documentary-series, but going into the first episode, we didn’t really have a clear idea of what it was going to be. Because it was a new project, it was also an obstacle course from day one, but the biggest challenge was figuring out how to tell these stories. We had to remember that we were a parenting platform and so we had to provide a show that would ideally be of service to parents.”

Never one to shy away from adversity, Browne’s holistic grasp of the numerous requisites each episode demands guaranteed a compelling result.

“Executing these mostly by myself was super challenging,” she said. “And it required a lot of time, research, and organization to make sure all aspects of production ran smoothly. It opened so many doors for me and the company in terms of creating ambitious and long-form video projects. All the episodes were not only shared by several other publishers, they also increased engagement with our audience through long-form videos, which was rare for us. Three of the episodes were our most watched videos for the month of September, and the series outperformed our average video view benchmark for the month—and we just got four more episodes sponsored, set to come out in early 2019.”

This type of commercially successful and culturally popular achievement is doubly rewarding and clearly indicates a glowing future for Browne. Her ability to conceive, realize and deliver what almost immediately became an in-demand product typifies the producer’s high voltage personal and professional style—significant attributes that are not lost upon her colleagues

“Ms. Browne is one of the best and most unique talents I have come across in my years in media and filmmaking world,” cinematographer-editor Wei Lee. “I worked on her web series “My Kid The…” and observed firsthand her tremendous capacity for film production. She is creative and detail-oriented which always makes collaborating with her a pleasure.”

Above her ongoing role as producer of “My Kid The . . .” Browne has a wide variety of outside interests and projects. In addition to her work at Fatherly (where she also produces a great deal of assorted video content, including her interviews with such celebrities as John Legend, Karamo Brown and Morgan Neville), she is currently producing passion project, ‘The Monster of Carmine Street,’ a documentary about an independent bookstore in New York City and its owner Jim Drougas (“Possibly the last bit of cultural heritage and a home to an eccentric community within the West Village in NYC” Browne said). But it’s the nurturing, helpful nature and familial quality of ‘My Kid The . . .” which makes this particular project so rewarding and well received.

“It opened so many doors for my team and the company in terms of creating ambitious projects,” Browne said. “The show demonstrated my capabilities for producing large-scale projects, both to myself and the people that I work with. By getting the recognition and results, it led me to several upcoming jobs including a new show in collaboration with Hearst Media called ‘Passing the Torch,’ a new show with celebrity guests called “The Build” and several documentary films with super talented people in the industry, which is all very humbling but I’m super excited to be a part of.”