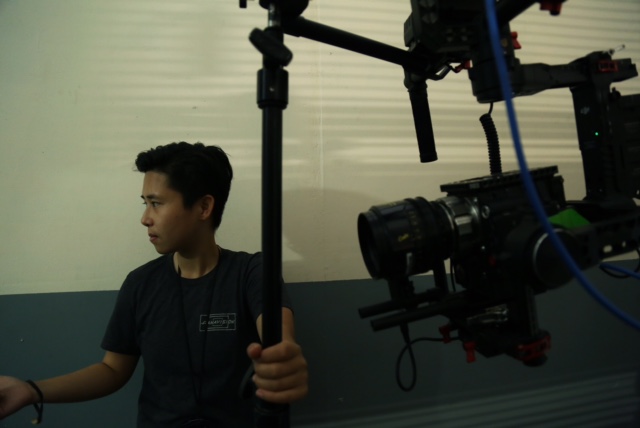 Cinematographer Ruixi Gao can’t help herself sometimes, she is overwhelmed with ideas. This is the blessing and the curse of possessing a creative personality. It’s incredibly difficult to make a film so when you do, you want someone talented and driven like Ruixi to be among those enabling you to manifest your vision. This was the mindset of Zhipeng Xing, director of “Last Call” when he approached Gao to be the DP for this film. After receiving the script from Xing, Ruixi recalls, “I sat down and read it immediately. I think it is instinctual for many cinematographers, it most certainly is for me. I could see the scenes inside my mind as I read. The whole picture played out for me. I understood the lighting & the perspective of the camera in relation to the action. It’s exciting when you read a script for the first time and the film is playing in your head; I wish the audience could see it so quickly. That’s part of what motivates me as a DP; I see this wonderful movie and the desire is to bring that to life for others to witness.” Besides her obvious passion, Ruixi brings years of experience and talent to every production she is on. An emotional film like “Last Call” requires every bit of her sensitivity and expertise.

The relationship between Director and DP is commonly accepted as one of the closest working relationships in film. Each director has their own process and the cinematographer must be flexible to this to help said director achieve their vision for the story being told. “Last Call” director Zhipeng Xing prefers to focus on the actors instead of fixating on the framing of the scene in the lens. Rather than a shirking of responsibility, this was a result of Xing’s trust in Gao’s abilities and talent. This allowed Ruixi to communicate extensively with her team. Working with her Gaffer and Key Grip to establish the lighting plan, and framing with the PD, the effort was highly collaborative. Her plan used soft filters for imaging effects and a low-key style with warm and cool tones to control different emotions between war and home.

This story depicts war and its effect on family. The father and son are separated from the mother (& wife) who is still in war torn Iraq. They communicate via letters and a weekly Facetime. After one of the weekly family Facetime talks, the father is speaking with the mother after their son has gone to bed. Disturbing noises are heard and the signal is lost. A week goes by with no word from the family’s beloved wife/mother and they fear the worst. Unable to sleep from worry, on the morning of the son’s birthday, the husband hears a knock at the door. It could be the mother or a government official to announce her unfortunate death. The filmmakers do not reveal the answer, leaving it up to the viewer to decide what they think happened. The purpose of telling this tale is not to resolve it either way but rather for the viewer to contemplate the effect of war on real people with families. In the last scene, prior to the knock, the father receives a letter from his wife in which she states that she won’t make it to see them for their son’s birthday.  When the father reads this letter it’s impossible to not feel the pain of being separated by these circumstances. War is cruel, it makes people ache; it’s also what makes this film work and have such impact.

Ruixi was awarded two best cinematography award for this film: Best Cinematography Platinum Award WINNER at the LA Shorts Awards & Best Cinematography Gold Award WINNER at the NYC Indie Film Awards (the film also received multiple other awards at these festivals). Gao’s passionate disdain for war and its malevolent effect on people in many parts of the world moved her to dig deep in her abilities for “Last Call.” Edwin Beckenbach worked with Ruixi on the film and professes, “Ruixi brings with her the experience of an international woman to a domestic industry that has traditionally been dominated by men and is not known for inclusivity or diversity. Film as art is a powerful generator and amplifier of cultural values and perspectives and as such the addition of underrepresented voices, especially those as promising as Ruixi’s, can entertain as well contribute to the benefit of society overall. In an industry where many people place their image before their abilities and ‘fake it until they make it’, Ruixi is authentic to a fault and is singularly focused on the artistic and technical challenges of the job at hand. Her dedication to her craft and clarity of vision is a unifying motivator for the camera and lighting crew to perform to the best of its ability.”

For many viewers of the film the most heart-wrenching aspect of the story is the young boy’s difficulty in being separated from his mother. With the understanding that this character would have be both a catalyst and proxy for the audience, Gao took extra preparations including reading psychology books on working with young professionals and preparing props with stickers and colored tape to make them more enjoyable. Far from being the task of a normal DP, this type of approach in working with a young actor is indicative of Ruixi’s overall pattern of professionalism. By creating a positive and friendly atmosphere in a variety of ways she is able to get the best performance from everyone and thereby get the best shots with the camera, to say nothing of coming in ahead of schedule. While some prefer to stay in their “own world” Ruixi Gao feels that the images she wants to create allow us to see through the eyes and emotions of others, which is what “Last Call” is all about. 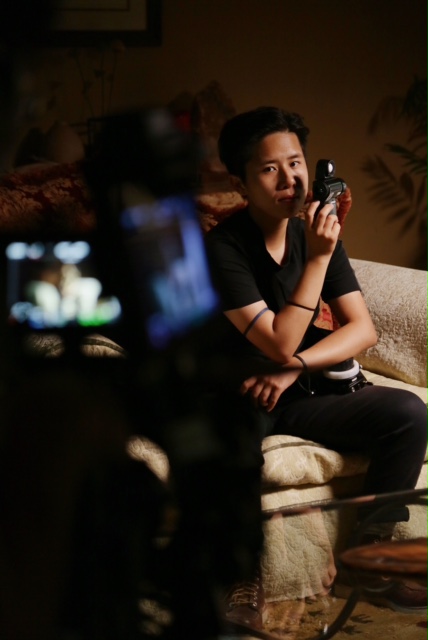