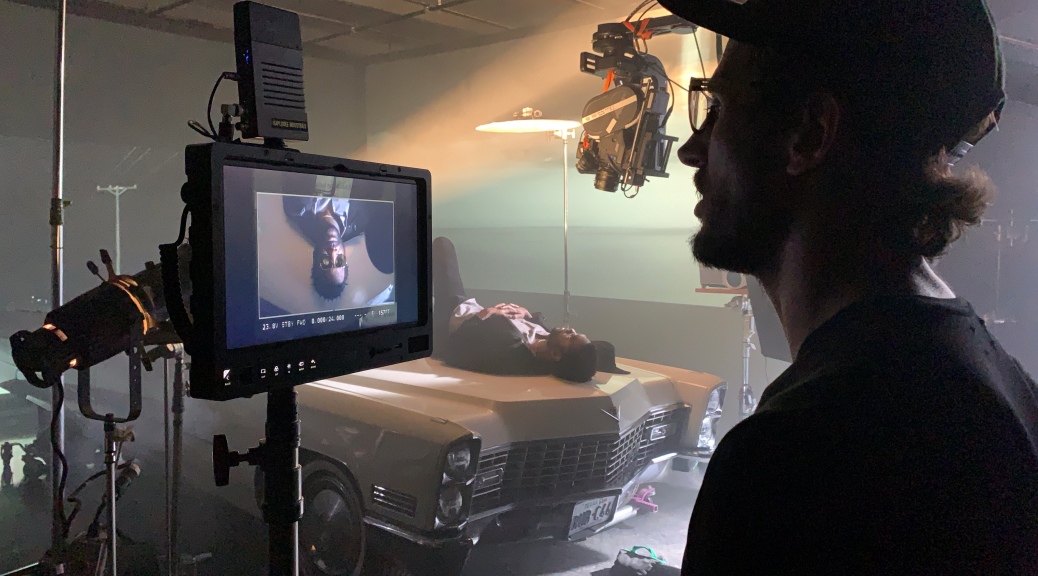 As fans, we are often wowed by the visual stories within our favorite music videos and taken away by the lyrics of our favorite songs, but we rarely consider the foundational work that goes into bringing these creative visions to fruition. Behind each and every chart-topping music video is a director working diligently to illustrate the music with a visual story.

French director Clément Oberto, currently based in L.A., is one of the rare creatives whose vision, drive and talent have led him to become the creative force behind numerous award-winning music videos.

Well known for his passion and clear vision, he has caught the attention of millions of viewers. Over the past 15 years he has directed music videos for internationally acclaimed artists, such as Christina Aguilera, Gary Clark Jr. Zhavia, and John Tejada. Along with stylish music videos for French singer Lou for her track “Dans le bleu du ciel“, which already gained over 5 million YouTube streams, and Canadian pop sensation Anjulie feat. Natalia Lafourcade’s hit “Holy Water”.

One project that really turned the heads of fans and the music industry alike was his remarkable work as the director behind the music video for four-time Grammy Award winning indie artist Gary Clark Jr.’s “Pearl Cadillac”.

The soulful track was taken from Clark’s 2019 album “This Land”, which took home the 2020 Grammy Award for Best Contemporary Blues Album and reached No. 6 on the Billboard Top 200 chart, making it his third consecutive top 10 album debut.

Clark wrote the track in honour of his mother and the experience of leaving home to embark on his next chapter. In a collaboration that could only be described as ‘serendipitous’, Oberto, who at the time was journaling about his own relationship with his mother, was approached by Warner Record Executive Producer Devin Sarno; who’s known for his work with iconic bands such as Red Hot Chili Peppers, My Chemical Romance and Green Day.

“I was diaring about the way my mom had led her life and how I wanted to make her proud, and within 5 minutes after writing this, Devin reached out with the song; asking if I was interested,” he recalls. “There was no way I wasn’t going to book that job. It was perfect timing.”

Oberto shot the video in classic black and white on 35mm film, creating a nostalgic and overall harmonic sensation to enhance the moving lyrics.

“I wanted to create a metaphorical video that would highlight memories of childhood and the passage towards adulthood while reflecting on the support Gary received from his mom,” he says. “I wanted the video to be like the song, poetic and soft, while also giving justice to that epic guitar solo.”

He used smoke and light to add symbolism to the video, which made it stand out and take home 9 awards at renowned global festivals including Best Music Video at the U.K.’s Ramsgate Film Festival and Best Cinematography at the Black Bird Film Festival in New York.

Along with directing and editing the video, he was also responsible for designing the original concept and storyline, while also building a stellar crew.

“I care to create strong relationships with my team. I surround myself with talent that I admire and I communicate a lot with them to make sure we are all on the same page,” Oberto shares.

“There is nothing better than feeling that everyone gets you, and has your back to make sure your vision comes to life accordingly, or even better than what you imagined. For Pearl Cadillac I proposed the 35mm format and the idea of shooting the car in a studio with plates of the road projected on screens, like they used to do back in the days. This way we’d be able to have Gary laying down on the hood as the car drives by itself, without taking risks for his safety.”

Clark shared in an interview with Billboard that it was his first video in 35mm black and white film and that “Clément was really passionate about telling the story of ‘Pearl Cadillac’.”

Producer Roger Mayer (“Antibirth,” “The Rambler”), who collaborated with Oberto on the videos for both Gary Clark Jr. and Anjulie feat. Natalia Lafourcade, shares that “Clément adds a flair unlike so many of his peers that elevates the project to an art piece… Working with Clément is a dream, he is a confident and determined filmmaker with a clear vision, and is able to communicate that to everyone working on the projects he’s attached to.”

Oberto’s ability to expedite an entire music video in record time and remain in control while bringing the artists’ vision to life are key factors that have led to his remarkable success.

The powerful song was the promotional single for the 2020 live action remake of the classic Walt Disney film “Mulan,” which was noted as Oscar worthy by Rolling Stone Magazine.

Oberto was brought on board, not just for his unique visual identity, but also due to the fact that the entire project needed to be overturned in a matter of days in order to coincide with Aguilera’s highly anticipated live performance on “Good Morning America.”

“The main challenge was the timing, combined with the Covid safety guidelines. To make sure everything would be safe and ready for us to shoot in a couple of days, and that we’d go over the post production process in a heartbeat,” Oberto shares. “We managed those challenges by working in confidence, hand in hand with my producer Boris Labourguigne at Left. He really made magic happen and got everything working tightly. As for Christina, it was pure bliss. She was very professional and easy to work with.”

Proving that he is a highly adaptable and humble director, Oberto applied a simple yet highly effective approach to the aesthetics of the video, using a few pieces of floating fabric in order to shine a light on Aguilera’s signature vocals.

“I usually create concepts and aesthetics to highlight the artist and the song. We spend a lot of time building sets and working on light, effects, transition, framing… We make sure everything feels magical,” he says. “With this project it was more simple, focused on the performance and not that much on the aesthetic. My job here was more about not trying to add complications by demanding, or wanting too much.”

Reaping over 2.6 million views on YouTube and 5 million viewers on “Good Morning America,” the music video’s end result was flawless, and it once again proved Oberto’s ability to transform an artist’s vision into reality.

His outstanding directorial achievements on both Gary Clark Jr. and Christina Aguilera’s music videos were created with Boris Labourguigne, who is the founder and president of Left Productions, an award winning video production company with offices in Paris, Los Angeles and London.

“Clément is really involved in every project from the creation to the delivery. He’s able to create a really strong relationship with clients, labels, and artists. He puts all his energy and talent to find the best solutions to do the best video possible,” says Labourguigne.

“He’s also super flexible and can work on a large scope of projects. He loves to be challenged, and is always open to discovering new territories, new talents, new brands, new styles. It is very stimulating to collaborate with him.”

In 2018 Oberto was also the leader behind the mysterious music video for American songwriter Zhavia’s debut single “Candlelight,” which is a bluesy R&B ballad about persevering through adversity.

Zhavia, who has over 3.2 million followers on Instagram, had just signed with Columbia Records, one of the most prestigious labels and home for iconic artists such as Beyonce, Adele, John Mayer, Mariah Carey, Bob Dylan, Pink Floyd and Pharrel Williams.

Honoring Zhavia’s artistic mission to motivate her fans to express their emotions while working towards their goals, the video required a thoughtful director who could turn the song into a stunning visual story.

Record producer Jenna Andrews, who’s known for her songwriting collaborations with Lily Allen, Noah Cyrus and BANKS, approached Oberto not only to conceptualize a video that would personify the heartfelt lyrics, but here again to deliver the project in a matter of days.

“We had to pull everything together in a heartbeat. We shot overnight, 3h from LA and created the proxies for the editor in the car on our way back to the city, so we could have our first cut on the exact same day,” he says. “It was an adventure, people at Sony and Columbia were skeptical about us delivering in time, but we did.”

His savvy leadership allowed production to maintain the strict filming schedule, to capture every single shot in record time and to deliver the video only 5 days.

He shares, “That was pretty wild for me. More than anything I’m happy that I was able to be there for Zhavia, to help the team in that crazy tight deadline and to sign her first single’s music video was really rewarding.”

Upon its release, the single became #1 worldwide on iTunes, along with the music video garnering a whopping 32.7 million streams and trending at #5 on YouTube.

Given the incredible demands that came with the active production, Oberto’s expertise in delivering such a brilliant final result was highly commended, not only by the record label’s executive heads, but also across the music industry.

“From the very beginning it was clear that Clément was a true visionary, whose concepts and ideas were incredible… him and his entire team were true magicians from the first meeting to the final product. He went above and beyond to deliver under a very tight deadline from the record label and he didn’t let us down,” says Zhavia’s manager and platinum award-winning artist and producer, Thomas Barsoe. “I hope to continue to work with Clément for years to come and can’t recommend him highly enough.”

Oberto’s proven repertoire of success expands far beyond the director’s chair. His entrepreneurial drive also allowed him to grow within the bustling entertainment industry. In 2020 he launched Creative Film Awards, an LA based music video, short film and fashion film festival that focuses on gathering creatives from all around the world and to create a gateway for promising industry filmmakers to gain recognition.

“The inspiration came while spending years showcasing my films in festivals. I was thinking how I could do things differently by hosting immersive events and promoting the work of the filmmakers through a community behind the festival,” Oberto shares. “I wanted to create a festival that would feel like a label, something filmmakers could feel proud of being part of, and also help them be seen by well established figures of the industry.”

With his proven track record of success, it seems like Oberto has no plans to slow down anytime soon, in fact it’s quite the opposite. He is currently working on “Voices,” his first feature film, as well as on “Greenroom” a podcast with record producer Jenna Andrews, which focuses on mental health in the music industry. The podcast features popular music figures such as Tegan and Sara, Upsahl, Rebecca Black, Parson James, Verité, Kiesza and many more.

With all this in mind, it’s fair to say that Clément Oberto is an unstoppable industry force whose diverse talents and relentless desire to bring stories to life will continue to captivate a global audience for a long time to come. So stay tuned.