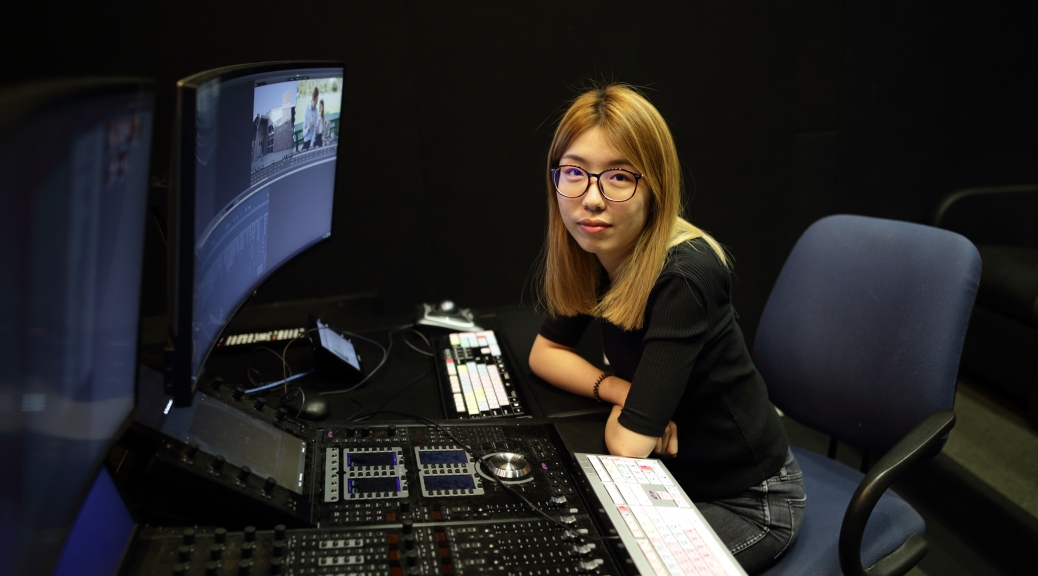 Xiaodan “Christy” Yang was a teenager when she realized she was meant to be a filmmaker. At the time, she and her friends at their high school in China were just having fun with a video camera. They were so excited and curious about the tool and would pretend to interview students during lunch breaks. Quickly, this transformed to casting classmates in small productions, and Yang was the leader.

“The most classic one was a Titanic parody where I picked two leading characters to play Jack and Rose from the “audition”. Then we shot the “I’m flying” scene. Their acting was so hilarious and the whole process was a lot of fun. I really enjoyed it and that’s the first time I started thinking that maybe I could be a real filmmaker someday. I wanted to bring larger audiences to tears of laughter and allow them to experience all sorts of emotions through my work,” said Yang.

Despite being in charge of her high school short films, Yang found her way to a more behind-the-scenes role in editing. Now, she is an award-winning editor and is recognized far beyond China for her talent. Through her work on dramatic films such as Kayla, Witness, Sixteen and It’s Not Just About a Film, Yang’s contributions as an editor shape these important stories into pieces of art, and all those who work with her know what an asset she is.

“I worked with Xiaodan on my film, Ashram, as well as a short film called The Review. I directed the films and she was my editor for both of them. To work with Xiaodan is to have a very smart, skilled and sensitive creative partner. She is very thoughtful about her editing decisions, and a very even-keeled and well-balanced guiding creative force for the project. She’s very competent and efficient, but also artistic and intuitive. She has strong communication and learning skills, which make us work efficiently,” said Matt Marlin, Writer and Director. “Xiaodan is a strong creative presence and also very flexible with working with different types of personalities. She often juggled multiple projects when working with me, and still made me feel like my project was at least an equal priority with the other things she was working on. She can roll with any notes I throw her way, and also push back when she believes in a creative decision strongly. She has a great intuition for how to best bring out the story from the footage provided.”

When working on the upcoming film Summer Orange, an artistic story, Yang knew it would be defined by the editing. When she first read the script, she was immediately captured by the characters and could feel the desolation they felt in every word. She instantly said yes to the project.

“Summer Orange is about a filmmaker dealing with his real life and the film he’s shooting. As a filmmaker myself, I felt close to him. As I was editing the film, the film also affected me in many ways. I was thinking deeply while working on this one,” said Yang.

The film follows Da, a film student in Los Angeles. During the time shooting his thesis film, his old friend, Lu, comes to visit him. It has been a few years since the two have seen each other, and they both have changed. At the same time, the relationship between Da and Xintong, the leading actress of his film, becomes ambiguous. With so many things going on, Da feels confused about film and reality.

“This is a very personal story for the director. Some plots and details come from his actual life experience. If other films are considered novels, this one is more like a prose. The story is sincere, but also abstract. Although nothing dramatic happens, the tone of the story is attractive. Sometimes life is just overwhelming, and people can’t do anything about it. The best part of this story is the dynamic between the characters. That was also my emphasis during editing,” said Yang.

Summer Orange is directed by Chen Xu, who also wrote the film. He had previously worked with Yang on Witness and It’s Not Just About a Film and knew her extraordinary editing talents would help captivate audiences to his subtle story. As the editor, Yang understood the director’s intentions of this story precisely. When going through the footage, every decision Xu made while shooting made sense to her and she knew just how to approach the editing. She could transform and breakdown the script without disrupting the artistic conception. As it was a calm story, the director chose to shoot the film in an objective way, meaning most of the shots were long takes. When Yang was editing, she watched each shot over and over to make sure she was choosing to highlight the best performances from each actor. After doing this, she still made sure not to cut the long takes, therefore ensuring the dynamic between each character was as close as possible to how it was originally shot, refining every take. She also slowed down her pace while editing and instead of simply thinking about what would be useful, she cared more about what felt right for the atmosphere.

Undoubtedly, Summer Orange will be a tremendous film and showcase what a formidable editor Yang is. It will premiere this May at none other than the prestigious Cannes Film Festival Short Film Corner and will expectedly make its way to several more festivals in the coming year.

“I feel so excited about the Cannes Film Festival, since it’s one of the best film festivals in the world. I believe this is just a good beginning, and more and more will come,” Yang concluded.