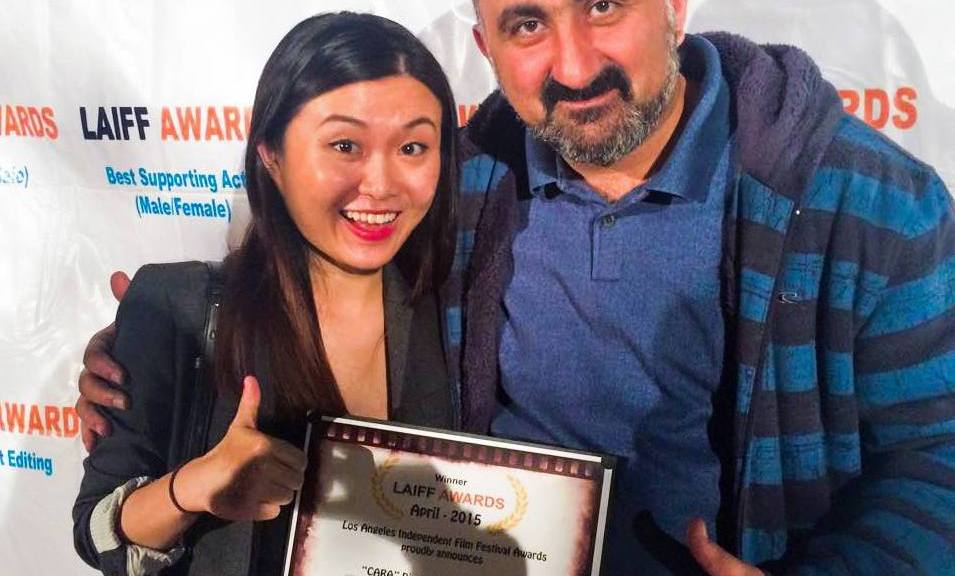 When an audience views a motion picture they’re completely caught up in the onscreen action and story line, but there’s so much more going on behind the camera. Out of the small army of the production crew’s specialized artisans and craftsmen, there is one driving figure head—the producer—and Chinese film producer Huanglizi Sun excels in that capacity. Sun’s combination of enthusiasm, aesthetics, superb organizational skills and instinct for great storytelling qualify her as one of the brightest rising forces in international cinema.

Sun’s lifelong romance with visual storytelling made her career path almost inevitable, especially since she came of age with a major contributor to the form right in her own backward.

“I grew up in Changsha, also called ‘Star City’ which is the capital of Hunan province,” Sun said. ”Changsha is where China’s second-most-watched TV network, Hunan Television, is located and after graduating from Nanjing University of the Arts, I interned there, as assistant to the directors and producers of the 2012 Hunan TV New Year’s Concert and Spring Festival Gala.”

It was invaluable experience which led Sun to gain key insight on her professional destiny.

“After months of hard work, I realized that I wanted to become a film producer rather than a TV producer: Sun said. “Not only because I am interested in filmmaking but also always on the lookout for great stories to tell in a cinematic way. I decided to move to Hollywood where the movies are made and learn how to ‘tell’ a story as a filmmaker.”

It’s a particularly demanding role, one that encompasses virtually every aspect of a production. “A Film Producer is a person who oversees the production of a film, Sun said. “Film Producers plan and coordinate various aspects of film production, such as selecting script, coordinating writing, directing and editing, and arranging finance.”

Based in Southern California, Sun’s drive and  peerless instinct quickly distinguished her.

“I started my career as Associate Producer in Mobscene Creative Productions,” Sun said. “I coordinated multiple editors with different producing teams and acted as liaison with clients. Everything had to happen simultaneously, on a tight deadline, with a very little margin for error, since the broadcasting schedule is on the line. It honed my ability to prioritize tasks and manage a workflow, while also being adaptive and flexible in the process to the ever-changing schedules of all parties involved.”

At Mobscene, Sun quickly found success: “I produced a web-series ‘Talking to Hollywood with Betty Zhou’, which airs weekly on China Central Television Channel (CCTV) 6, Tencent and IQIYI and it quickly gained a large viewership.”

Moving on to a position with fast rising company Big Monster Productions, Sun quickly identified a unique property—the multiple award winning 2015 short, ‘Cara,’ and is currently in the process of transforming it into a full length feature

“It explores many themes and motifs that are both timely and timeless—society’s expectation of women, coming of age and the athletic soul,” Sun said. “The story focuses on a fifteen year old swimming athlete who dreams of success with the national swimming team. Two weeks prior to her most important competition, Cara learns she is pregnant. In her last attempt to reach the top, Cara needs to confront the biggest challenge of her life— a decision which could make it or break it for her.”

“In the context of a feature, those themes can be explored in more depth and detail.” Sun said. “Transitioning Cara from a short film into a feature is a decision rooted in the belief that it has the potential to succeed both critically and commercially, given that it tells a story people will truly care about.

This is where Sun’s holistic grasp on the filmmaking process really comes into play and is certain to provide the production tremendous advantage.

“Writing a short film is one thing, writing a feature can be an entirely different process, one that  presents an entirely different set of challenges,” Sun said. “The story will be significantly more complex than the original and may go through many drafts and revisions before we are satisfied. The next step is going into production and this will also prove to be a challenge—both logistically and financially. It will take meticulous planning, many supporters and a great team effort to truly bring this vision to life.”

Sun’s ability to identify, anticipate, and troubleshoot any unexpected complication or mishap is invaluable in itself, but her comprehensive vision also extends beyond film production and reaches into other key aspects of the business, branding and marketing.

“Ms.Sun is an essential member of our team,” Big Monster president Wentao Wang said. “Her expertise in producing different types of media, ranging from films, promos to branding content is paramount to Big Monster’s success. With an acutely honed ability to judge a project’s potential and the great taste to back it up, she ensures that Big Monster only brings in a roster of projects of the highest quality. From the timely story of “Cara” to pioneering the future of multi-channel network, Ms. Sun single-handedly paves the way for Big Monster to thrive for years to come.”

Having already proven herself both at home and in Hollywood, Sun is clearly a cinematic force to be reckoned with.

“I want to make successful, memorable films, focusing on small characters with big impact that definitely have the potential to take many by heart,” Sun said. As a producer, her mixture of ambition, pragmatism, artistry and understanding of what makes a story worthwhile all combine with ideal symmetry, and what really drives Sun is one simple fact: “Making films is my greatest pleasure.”