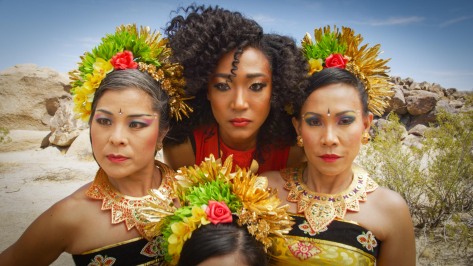 Documentaries about music and musicians are extremely popular. A recent production of this ilk presents a very unique approach on the idea. Bali: Beats of Paradise explores two different artists from different cultures at divergent stages of their career. While the artists are featured, the true story is about a little explored form of music. Filmmaker Livi Zheng (along with EPs His Excellency Ambassador Umar Hadi, Indonesian Ambassador to Korea and Julia Gouw, ranked among the “25 Most Powerful Women in Banking” five times by American Banker Magazine) crafted this documentary which shows the collaboration of Grammy Award-winning vocalist Judith Hill (20 Feet from Stardom) and composer Nyoman Wenten as they collaborate on a new project which fuses contemporary music with traditional Indonesian Gamelan music.

Wenten has spent four decades as a purveyor and champion of Indonesian Gamelan music. Hill’s search for unique sounds peaked her interest in Gamelan. This film documents their exploration and fusion of funk and Gamelan in Hill’s work, present prominently in the “Queen of the Hill” music video. Bali: Beats of Paradise expertly displays the passing of the torch among artists of different generations while also communicating the search for new inspiration, sometimes found in preexisting sources. Gamelan may be this regions classical music but its inherent sounds and sights are dramatically different than what most of the world is accustomed to.

The subtext here is that the cultural identity of Indonesia is rich and relatively unexplored by the West. The sights and sounds of this documentary serve as a vacation to a visually and audibly stimulating other world. Zheng notes, “Most people will never have the chance to experience the beautiful, vibrant scenery Bali is famous for, said Zheng. “When I traveled to Bali to make this film, the most important thing was to capture the culture and traditions of everyday life – including Balinese ceremonies. Whether filled with joy or sorrow, each one is always accompanied by the traditional sounds of Gamelan.”

Bali: Beats of Paradise world premieres November 7th in Beverly Hills at the Academy of Motion Pictures Arts and Sciences and opens on November 16th in Los Angeles and New York.